WHILE maintaining a thriving sheep mob throughout drought-like conditions has been challenging for mixed farmer Tom Weckert, he says his Prime SAMM-cross ewes have performed above expectations.

Tom was attracted to the breed more than 13 years ago when he was looking to graze a "hardier sheep" at Orroroo.

Previously, the Weckert family had run Merino ewes across their Brinkworth and Orroroo properties.
"We wanted to breed a meatier sheep but with quality wool too," Tom said. "We aim to produce a true dual-purpose mob." 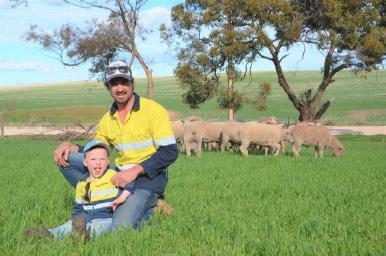 Tom farms with his parents Andrew and Patsy and his wife Abbe at Orroroo and Brinkworth.
After experiencing continued dry seasons, he has destocked from 1700 head of sheep to less than 800.

"Throughout summer we destocked quite heavily," Tom said.

He said although the breed's hardiness meant it was suited for Orroroo's marginal country, sheep would have struggled to retain condition this season on such "bare paddocks.

"SAMM ewes are able to hold their condition but we still had to change the breeding base pretty dramatically because of a lack of feed," he said.

"I can drive around the paddock and they are very protective of lambs," he said.

"Ewes have a solid structure too and are quite tall when compared with other breeds."

Tom said he was interested in the breed's ability to transfer its maternal characteristics into a quality lamb and also maintain high fertility.

"We have joined SAMM ewe lambs at 10 months old for about 10 years and we had 70 per cent to 96pc joining percentages," he said.

"The main ewe mob reached 133pc for our best joining percentage but across an eight-year period we have averaged 112pc.

"Last year we only had 100 millimetres of rain for the growing season and we still had a joining percentage of 104pc."

June/July-drop lambs are weaned at 12 to 15 weeks and then put on legume stubble throughout summer but last year, for the first time in about five years, lambs were fed pellets in a feedlot.

"It was worthwhile because of the high prices for lamb," Tom said.

Lambs are feed lotted for four to six weeks and sold on-hook at about eight to nine months old, with lambs sold in March making $223.

"A Merino lamb might be 42pc for carcase yield so the SAMM breed has helped to increase that. Even if lambs were just in the paddock it would still be about 45pc," he said.

"We stopped mulesing whether lambs 10 years ago and ewe lambs about two years ago -that was also a large part of why we chose the breed," he said.

"When we select rams we always focus on wool figures -the breed already has quality carcase traits so we focus on selecting for wool in rams to make sure its quality remains high," he said.

The average fleece weight for SAMM ewes is about 5kg to 6kg and last year, the 21-micron wool from lambs made 1400 cents a kilogram.

"The ultimate aim is to produce more wool and lambs out of less ewes -the breed can help us do that," Tom said.